To design, manufacture and install a series of pneumatic presses too assemble a axial fan motor and impellor one of the presses had to develop a force of 2 tonne on the work piece with a relatively large stroke.

The presses were designed to be bench mounted so they can be integrated into their flexible manufacturing cell. All presses were PLC Controlled this was a quality requirement as not to allow defective parts to be passed as good product.

The large floor mounted press was designed to reduce the amount of force the cylinder had to exert but still achieving the 2 tonne of force and a large travel. The solution was to use a toggle / knuckle type mechanism which allowed the stroke of the press to be large and could develop the large force at the point where it was required. 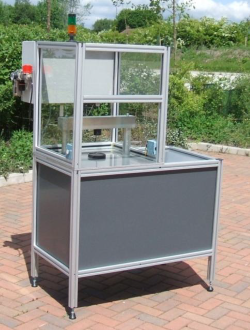 Sign up to our newsletter to receive information about our products and events.